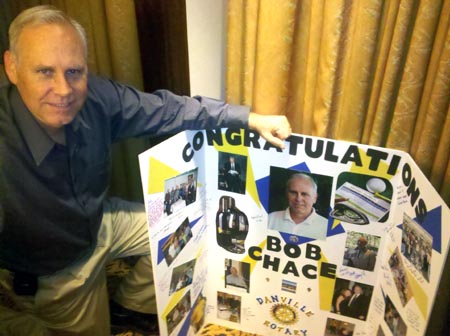 Last weekend – Pres Elect Bob attended the President Elect Training Seminar in San Jose along with 450 other PEs from 11 Districts. Maybe he will say a few words about it.

Last Week – Visitors from the Past told the club about life in the Valley in the late 1800s and events leading up to women’s suffrage in California 100 years ago -“Remember the Ladies” exhibit coming soon to the Museum of the San Ramon Valley in the restored Southern Pacific depot in downtown Danville.

Lots of guests this last including former members Jack Hounslow and Mike Nelson.

Can you help? – The Alamo club, who has been a huge contributor to the success of the new “Rotacare” free clinic in Pittsburg, has asked our club to see if there is someone who would be willing to donate a couple of hours a week to do simple data entry. If you can help, please let Pres Tony know.

New Sheriff in Town – Did we mention that David Roby was a former police officer at UC Berkeley? Pres Tony badged David as Sergeant at Arms for the balance of this year. 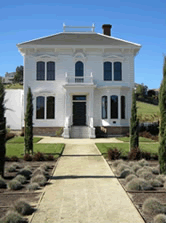 Glass House can be seen from 680 today

Prospective Member – Terry Cole, sponsored by Jim Crocker –  Terry has returned to this area after living in Twain Harte and being a member of that club. Although he lives in Rossmoor, his daughter and her family live in Danville and he is here often. He is keen to join our club. Terry has a lots of experience in the golf world and with raising funds and large events. Please introduce yourself to Terry.

Gold Marble – Club photographer Edna searched for gold without success. This week the pot is $75.

The Club meets Mondays at NOON
at the Black Bear in Danville.

To confirm that the club is meeting on any given Monday, please contact Gary Vilhauer at vilhauer@pacbell.net to confirm.