Crab Feed –  Thanks to everyone for pulling together at the last minute to make the event the big success that it was. Special thanks to Crabmeister Dante Tosetti for leading the way.

Prospective Member – Terry Cole, sponsored by Jim Crocker –  Terry has returned to this area after living in Twain Harte and being a member of that club. Although he lives in Rossmoor, his daughter and her family live in Danville and he is here often. He is keen to join our club. Terry has a lots of experience in the golf world and with raising funds and large events. Please introduce yourself to Terry. 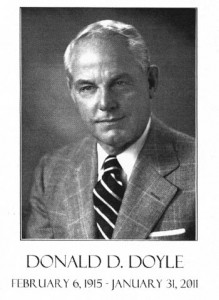 Remembering Donald Doyle – Don Doyle joined Danville Rotary in 2001 sponsored by Greg Clark. When he could no longer attend meetings the club made him an Honorary Member. He passed away in his home surrounded by family just one week short of his 96th birthday.

March 11 – Burger flipping for CASA at St Joan of Arc

Gold Marble – Honored Guest and Past District Governor Adrian Mendes, member of Walnut Creek Rotary and Danville resident, struck gold for $200. This week the pot is $25.

The Club meets Mondays at NOON
at the Black Bear in Danville.

To confirm that the club is meeting on any given Monday, please contact Gary Vilhauer at vilhauer@pacbell.net to confirm.